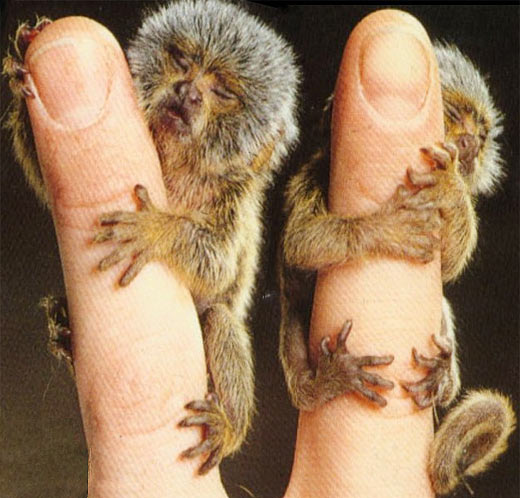 See more about the Pygmy Marmoset 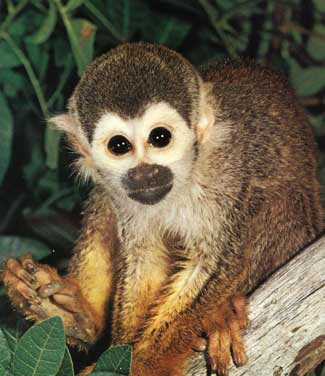 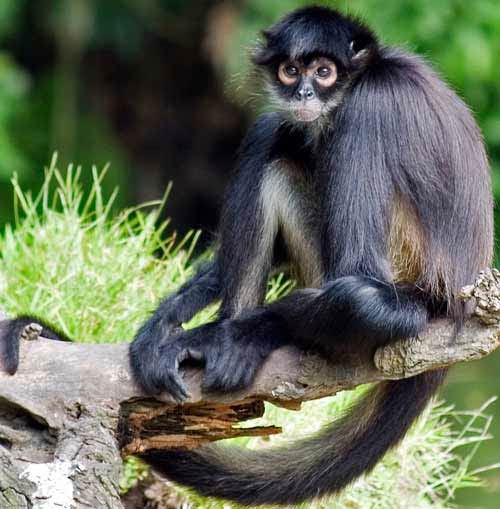 With its very long arms the spider monkey may be the most acrobatic of all the monkeys, looping and swinging very long distances. 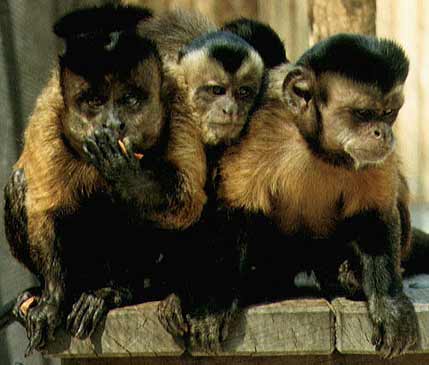 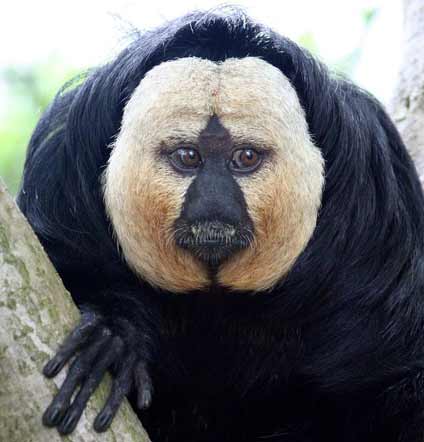 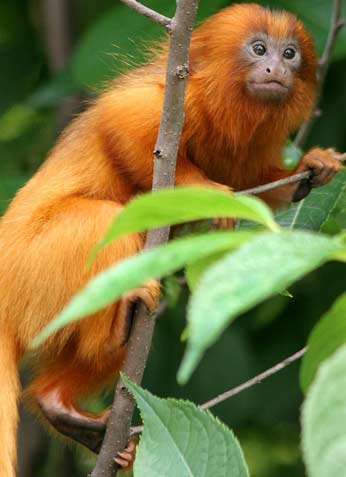 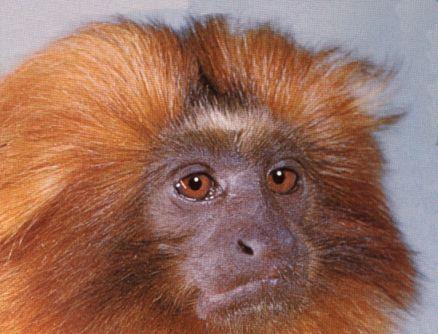 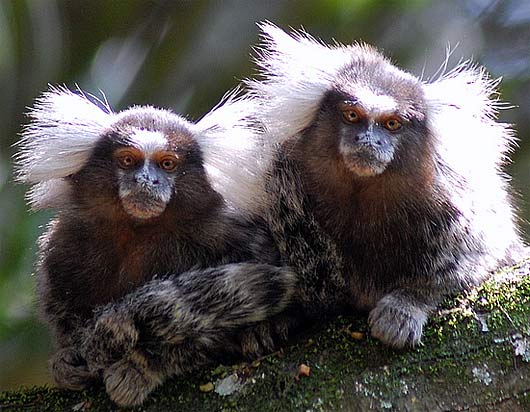 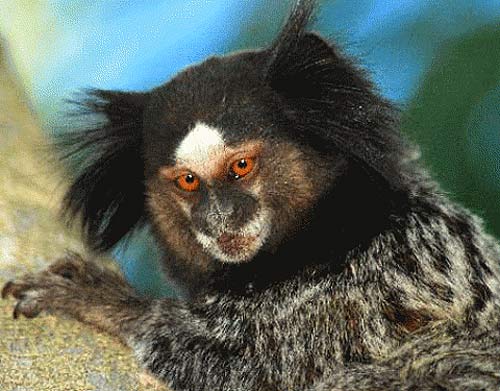 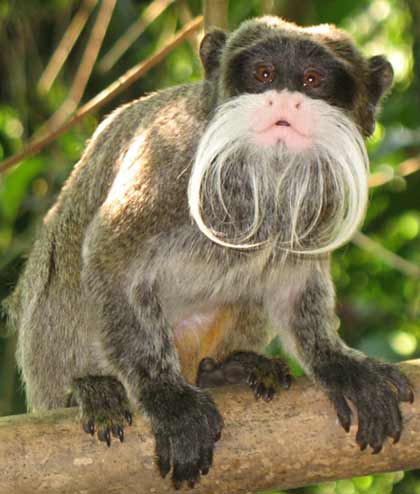 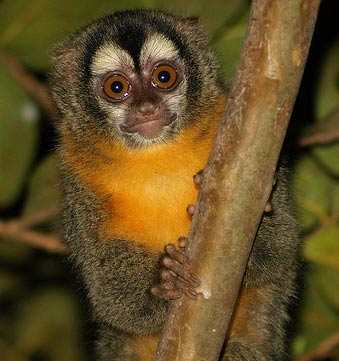 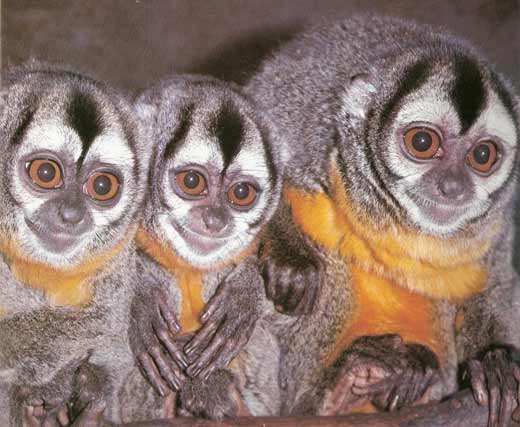 The owl monkeys are rain forest monkeys that have a bit of an owlish face that always seems to be smiling. They have many different vocalizations, up to 50 or more, including a piercing alarm shriek. They are night eaters, usually in pairs, they go browsing and foraging, eating fruit, leaves, and insects in the dark forest. In the daytime they sleep together in small family groups within hallowed-out trees. 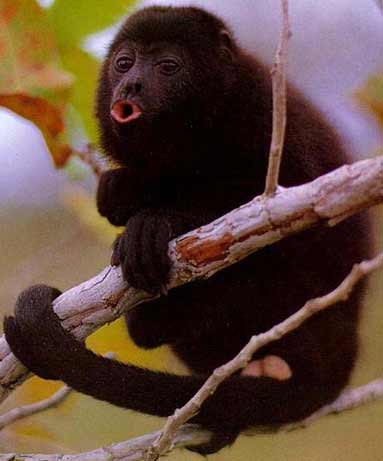 Who is the loudest monkey in all the jungle? That's right, the Howler isn't called that for nothing. Their howl can be heard from 3-4 miles (4-6.5 km) away and perhaps even 10. They are also the largest types of monkeys found in the Americas standing up to 2 feet (0.6 m) tall. 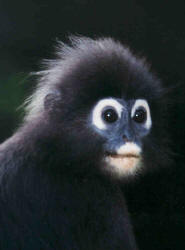 These Langurs are leaf eaters and are also known as the Dusky Leaf Monkey. They are not aggresive although they are territorial and stay in troops with a male leader and many females. They prefer trees and daylight and have good hearing and vision. 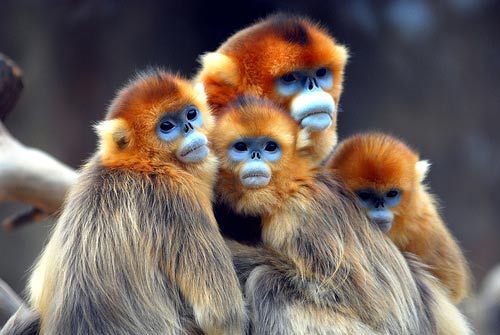 These are some colorful Asian animals. They live very high in the trees in secluded densely forested areas, sometimes in very large groups. The fur on their backs can grow to be fairly long. A few specimens of a new species were recently found in a remote part of Myanmar. They are very photogenic be sure to check out their page here: snub-nosed monkeys 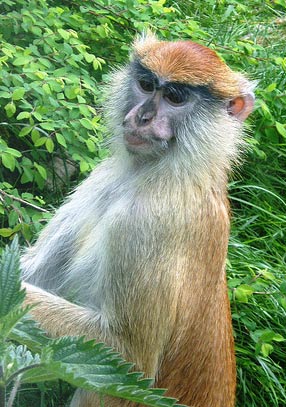 The patas monkey is slender with long arms and legs, better suited to walking and running than to moving in the trees. They are very fast on the ground moving up to 55 kph or 34 mph. They do prefer to sleep in trees and will each sleep in their own separate tree. They live in Central Africa and the males have blue scrotums. 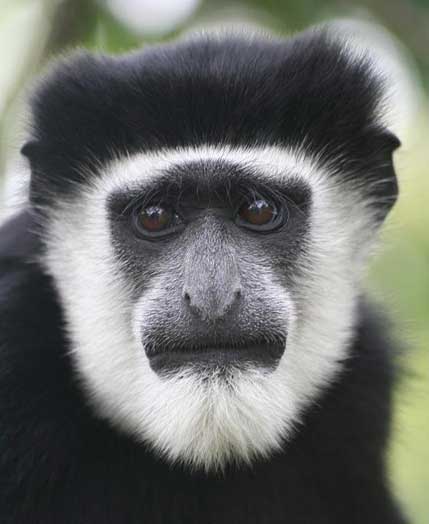 The Colobus is born white and turns black (with white coloring) while still very young. They have no thumbs and prefer treetops and tender leaves in Eastern Africa. 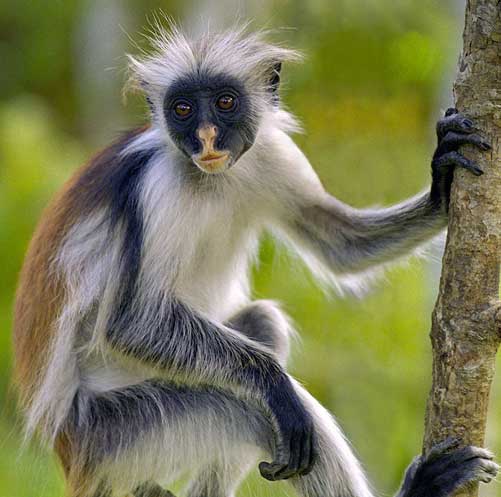 The Red Colobus also eats mostly leaves. They can eat from more than 60 different kinds of plants. Sometimes they can share trees with other monkeys since their diet does not overlap with that of the other monkeys. 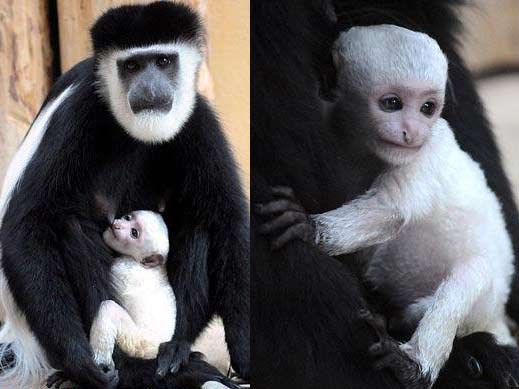 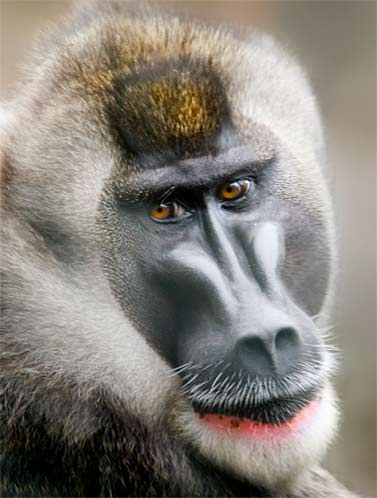 The Drill is an endangered primate. In the equatorial region of Africa the drill is known as "bushmeat" and eaten. Their habitat has also been largely destroyed. Drills move on the ground and in the lower levels of trees and eat mostly fruit. 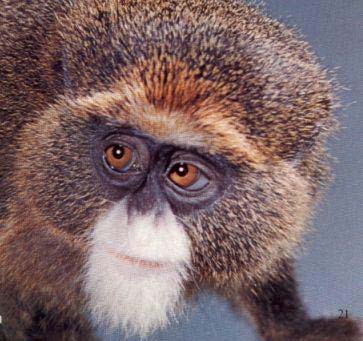 DeBrazza's monkeys employ a variety of gestures to communicate with each other. These include staring, staring with mouth open, head-bobbing, the fearful grimace, yawning and head-shaking. These gestures have to do with displays of aggression or appeasement. 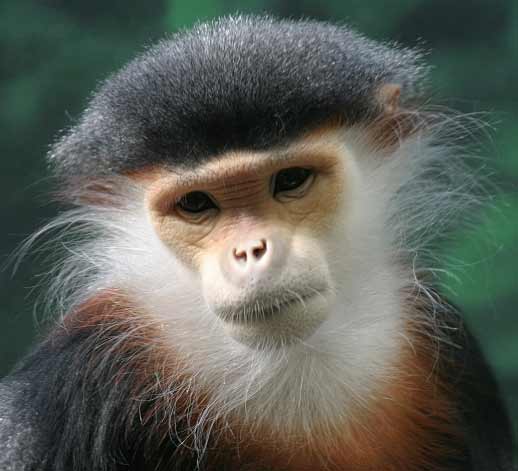 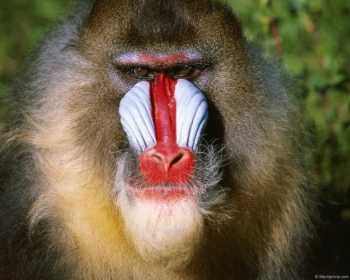 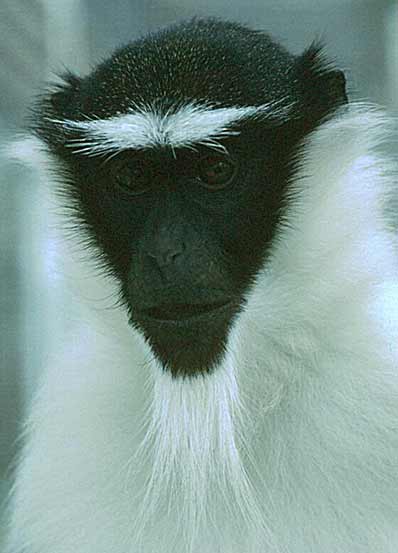 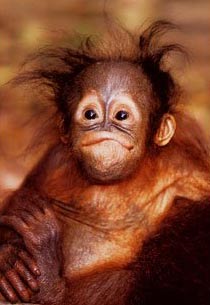 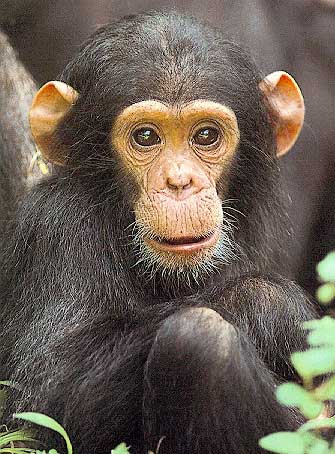 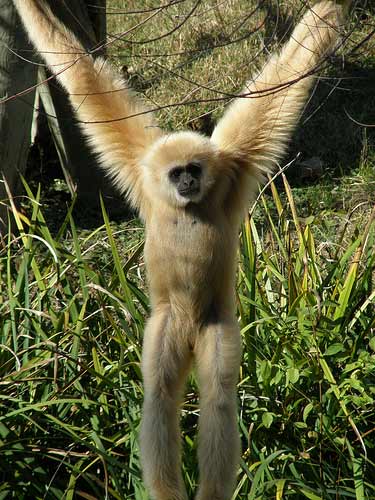 The Gibbon (13 species) - fast, agile, vocal and social, they are closer to monkeys than the great apes. 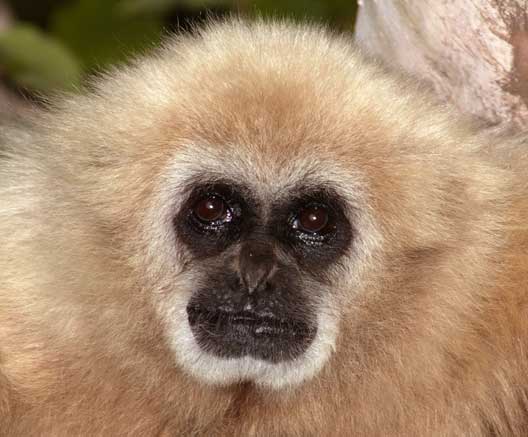 All together, the primate group (order) has a much wider scope of mammals from the tiny shrew to the enormous gorilla. Some of these species are certainly among the most intelligent animals and then there are some that are not as intelligent.

Man has always been fascinated with monkeys. They were perhaps the first animals painted on cave walls and depicted in rock art. In Egypt, India, China, Southeast Asia, Greece, and the Americas, ancient civilizations depicted the monkeys and interpreted them in many symbolic ways. Why? Because they can be very fascinating creatures to watch - lively, charismatic, and curious and perhaps because we see the resemblance to ourselves.

See the taxonomy tree (species list and categories) of all kinds of monkeys or also why not to buy a monkey.

Or if you have seen enough monkeys how about other mammal facts or types of snakes or lizards. 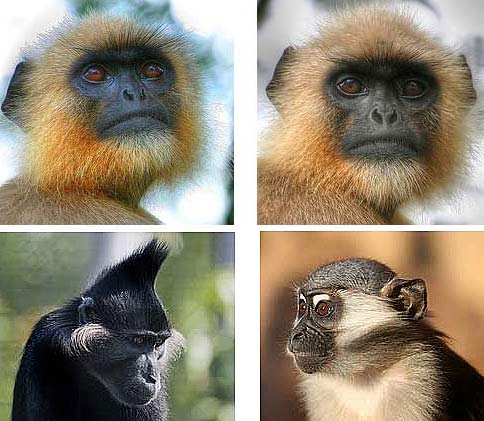