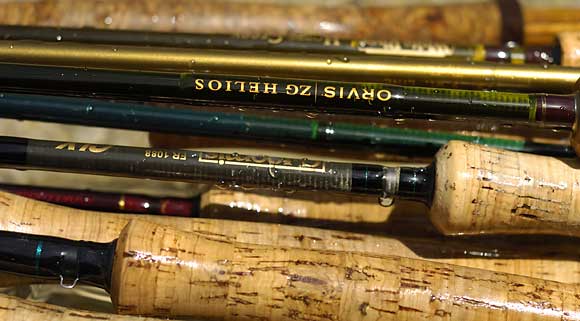 CURIOUS ABOUT what manufacturers mean when they throw around terms like ‘mandrel,’ ‘scrim,’ ‘pre-preg,’ ‘resin,’ and ‘modulus?’ Here’s a quick overview of the basic techniques used in the manufacture of a modern carbon graphite fly rod. (Bamboo rod-building techniques require a book unto themselves.)

Carbon Fibers and the Main Flag and Scrim 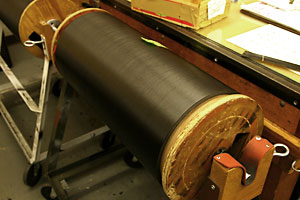 A roll of graphite fiber material prior to being cut into "flags."

The main flag and scrim are both composed of carbon fibers that run linearly, side by side, and come in the form of a roll. Carbon fibers can be manufactured in very long lengths, so a roll of carbon that is 120 feet long would have fibers that are 120 feet long and run the entire length of the roll. Manufacturers will choose fiber rolls with specific densities — measured by the number fibers per inch going across the sheet — depending on the performance characteristics they want to achieve.

In the recent past, the term ‘modulus’ was tossed around a lot in fly rod performance descriptions, but it’s simply a reference to a material’s resistance to bending before being permanently deformed or broken; the higher the modulus, the more resistance to bending you get with less material. High-modulus carbon/graphite materials have allowed modern manufacturers to build lighter rods but maintain stiffness.

The carbon material arrives as a roll and is impregnated with epoxy that is sticky or tacky and not yet set or “cured.” It has a backing that can be peeled off in manufacturing, just like you would peel a label off of a piece of paper that keeps the sticky part from being exposed. The combination of carbon fibers and epoxy that has yet to be cured in the final heating process is called the “pre-preg” and needs to be kept in a freezer until used.

Manufacturers cut the pre-preg carbon into a shape or pattern called the “main flag.” With the fibers aligned from butt to tip on the rod, the main flag’s primary purpose is to give the rod strength along the length of the rod. The flag is typically triangular in shape but is often tailored to give the rod its bending and casting characteristics. It needs to wrap at least once around the mandrel (described below) so that the rod is solid all the way around, but more or fewer wraps in the right areas will change where the rod flexes and its target line weight.

The scrim is very similar to the main flag and is used in conjunction with it, except it is used to provide strength around the rod, not along its length. Manufacturers call this “hoop strength.”

Scrim comes in two different forms. One type is backed with a fiberglass matte. The fiberglass acts to give the rod additional hoop strength and in some cases additional structural integrity, making it harder to break but often at a cost of additional weight. Other scrims are just carbon fibers, similar to what we described above for the main flag. While the main flag fibers run along the length of the rod linearly, the scrim fibers are cut in a pattern that are biased to the length of the rod and at times oriented 90 degrees to the main flag. The result is a crisscross pattern of carbon fibers in the finished rod. Those that run along the length give the rod its casting and flexing characteristics, and those that run around the rod give it its strength and oppose the tendency of the rod to collapse and flatten as it is cast. You don’t need as much of the scrim material to produce the desired strength for the rod, but both the main flag and scrim are critical to performance.

Once the right combination and design of the main flag and scrim are determined (actual blueprints and templates are used to produce the shape of the flag design for each rod), the rod can now go into production. The backing is removed from the main flag and it is tacked, with the scrim and by use of a heating pad, to the mandrel, a specially designed and tapered steel shaft. Remember that the pre-preg starts as a tacky material. Once a small amount of heat is applied to the material it becomes stickier and will adhere to the mandrel. Both the scrim and main flag can be attached at the same time along the length of the mandrel at exactly the right location. When the tacking is complete, if the mandrel were picked up it would look like a flag on a pole — you could pick it up and wave it in the air; thus the term ‘flag.’ The flag has not been rolled onto the mandrel yet, which brings us to the next step.

The mandrel and the tacked carbon fiber and scrim flags are then put into a rolling machine. Most rolling machines look like two ironing boards, one upside down, that meet and then slide to wrap or roll the carbon around the mandrel. The machine applies specific pressure to the mandrel and the flags to produce the perfect wrap and compaction needed for the rod being produced. The ferrules are also reinforced when rolling the blank, by using smaller flags that are rolled simultaneously with the rod on the rolling table. For a four-piece rod, there are four different designs and four different mandrels used. This process needs to be repeated each time a section is made.

Once the rolling is completed the rods are put into a machine that wraps a clear cellophane tape over the entire rolled carbon tube that is on the mandrel. The cellophane wrap that is used is very heat resistant, and it also needs to be put on using just the right amount of pressure. In the next step the mandrel is put into an oven, where the mandrel itself expands slightly. The cellophane wrap contracts or shrinks as needed and helps compact the carbon main flag and scrim into very solid tapered tube. The oven heating process is typically done at around 250 degrees, although this can change depending on the type of epoxy or resin used in the carbon fibers. This curing process takes the rod from pre-preg to its final shape as a solid carbon tube, or “blank.”

Next, a special machine is used to separate the mandrel from carbon blank, and the heat-shrink tape is removed. Manufacturers then sand the blank to make it smooth before applying their paint and clear coat finishes that make the blank whatever color wanted.

From here the blanks need to be finished before they can be assembled into fly rods. The blanks are trimmed to the right length and for the right load characteristics, and the pieces of each blank are then fitted together to ensure that the right level of engagement is reached in each of the ferrules. Once all this is completed the rod is dipped and “painted” in an epoxy-enriched mixture that becomes an integral part of the rod and helps to protect the rod from chips and dings. This “paint” typically requires another lower temperature curing process before it is complete.

The blanks are now ready for assembly. Reel seats of various materials and designs, along with cork grips, are added and glued into place onto the blank. The guides are spaced along the length of the rod and then wrapped manually into place by skilled workers. Special coatings help protect the wraps and ensure that they cannot slip or corrode.

Finally, before any finished rod design is sent out to market, manufacturers usually test production rods in a variety of ways: for their load characteristics, their flex profiles, and how close they come to matching their prototype breakage characteristics. 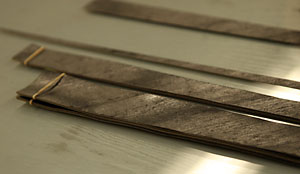 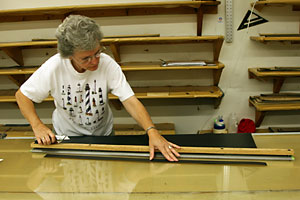 A craftsperson measures and cuts the graphite. 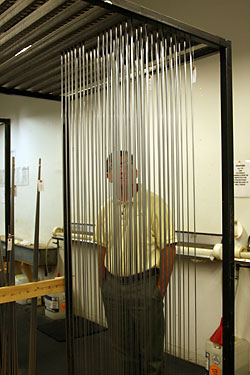 Mandrels are prepared to have the flag tacked to them prior to rolling. 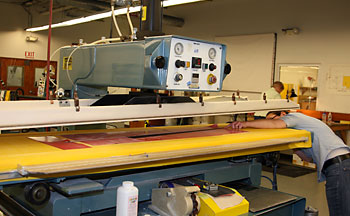 A flag and mandrel are positioned in the rolling machine, which wraps the carbon around the mandrel. 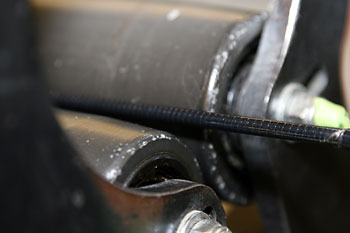 A machine rolls cellophane around the blank prior it being placed in an oven. 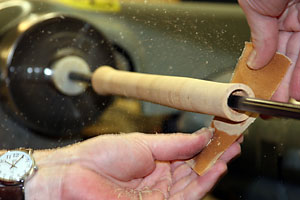 After being filed into shape, a cork grip is sanded smooth.