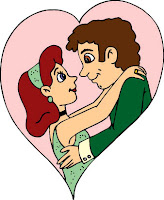 After I have started taking  public transport on my way back from work I have had some very interesting experiences. A couple of days back, as I rushed up the steps of the Kasturba Nagar MRTS station to catch a train, I nearly collided with a young couple leaning on the railings lost in each other. As my aging limbs could not climb fast enough, I missed the train. So I made my way to one of those metal seats to sit out the next 5-7 minutes before the next train arrived.

I looked for a seat which was close to where the ladies compartment was expected to stop- it was occupied by yet another couple- this one holding hands. Suppressing a smile I occupied the other end of the seat. Just as I sat down, another lady made her way to the same seat and asked me to move over to make room for her to sit. I was a little hesitant to move because I would then intrude into the couple’s privacy. “Listen, if you want to hold hands please go somewhere else and do it. Don’t sit like this in a public place” said the lad rudely. Poor things they got up and left the place. “Shameless people” she muttered as she plonked herself next to me. I looked at her curiously. She was middle aged and had all the outwards symbols of marriage. I wondered if she had never held her husband’s hands..?

There was a survey published by some magazine ( I don’t remember the name) which had done a rating of Indian cities based on the extent to which Public Display of Affection or PDA was observed. Chennai ofcourse figured lowest and Mumbai and Pune on the top.

Now, I wonder what is it that makes us so scared to display our affections for a partner in public? Even married couples seem shy to hold hands. But, the question is what defines public? In my mother’s generation anything outside the bedroom was considered public. So, in joint families young couples did not even speak much to each other in front of elders.  Couples who were dating and courting ofcourse did not want to be even observed with each other so the question of drawing further attention by indulging in PDA was out of question!

The city of Mumbai is an interesting variation in this regard. A city where space is a problem and given our intrinsic  cultural discomfort with PDA, the definition of “public” if often equal to “ anonymity” . So, the guiding factor there is that if you are out of your house and neighbourhood it is Okay to hug, kiss and do whatever, because, afterall people don’t know you!! Living in overcrowded tenements with nearly 6 to a room, for young couples in Mumbai, the park, or the marine drive is their island of privacy.

Over the years with more inter mingling of the sexes in urban areas, we see more young couples who are atleast not afraid to be seen together  in public places. I am told that in Chennai along the Marina beach there are police patrols to “break up” couples who may be doing more than holding hands.  The reasons stated being “to prevent prostitution”.  But I am sure every policeman knows the difference between a couple in love and a couple involved in a business relationship. Then why this moral high ground?

I am surprised that as a society we tolerate domestic violence observing it but not intervening to break it up yet when it comes to display of affection we are very uncomfortable.  I remember an incident from my childhood when a man barged into the ladies waiting room at Coimbatore railway station and publicly proceeded to beat up his wife. Not one of the women there except my mother said anything. She was the only one who had the courage to stand up and tell the guy to get out. Yet, there is another incident where a young man was standing close to the ladies seat in a bus smiling and talking to his girl friend. The conductor made some nasty remarks and asked him to move away.

“There are limits of decency” is one comment I hear whenever something like this is being discussed. But what is this so called “decency”? Let us face it, no one is doing more than holding hands or putting their arms around each other when they display their affection for a partner in public.  If you are embarrassed then that is your problem. Often, it is not the act of seeing a couple with arms around each other that embarrasses us but the open expression of their love for each other. We see so much of cavorting, dancing, running around trees and worse in our Indian films yet when it comes to real life we  don’t tolerate it. Why repress some simple expressions of love? Parents don’t feel ashamed to yell at each other in front of their children yet feel shy to put their arms around each other in front of them.

Are we as a society afraid to display happiness? Nothing can be more beautiful than an expression of love. If we have not expressed it let us alteast be tolerant to others who are more spontaneous about expressing it.

There is a saying “Love and fragrance cannot be hidden”- so why are we trying to do the impossible?