The Myth of Abstract Money

The most powerful dogma of the modern world is the belief in abstract money. It led to the financial meltdown and is at the center of the current debt crisis.

As the following graph shows, if the world economy had continued on the same track as it had for the first seven years of the new millennium, World GDP would have reached about $77 trillion by 2009, instead it decreased between 2007 and 2009 to wind up at $64 trillion. So the financial crisis cost the world about $13 trillion. How much is that? Total United States GDP in 2009 was about $14 trillion, so the financial crisis cost the world almost all the goods and services produced in the United States in one year. 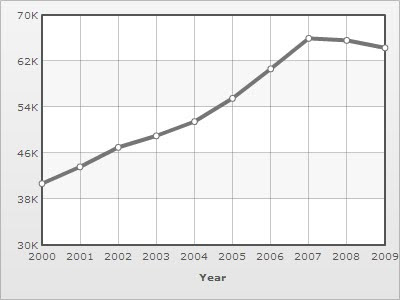 What caused this calamity? Was it war, pestilence, natural disasters, lack of natural resources? No. Nothing happened in 2008 to stop the world economy in its tracks other than a series of numbers on a computer screen changing from black to red.


It may seem too simple to be true, but it isn’t. Nothing happened in 2008. Nothing changed other than the numbers on a computer screen, yet these digital 1’s and 0’s caused the world to lose the rough equivalent of all the work and resources of the United States for one year.
Money is a very important cultural concept that has allowed human economies to move beyond bartering and enable us to specialize our efforts. Money is a recognized medium of exchange that will store value.

Imagine a very skilled worker who could do all the manual labor necessary to build a house. The average house in the United States costs about $200,000 and the rule of thumb is that 25% of the value of a home is labor. So lets say our versatile construction worker could build one house all by himself in a year, for which he is paid $ 50,000. Medium household income in the United States is about $50,000, so the effort closely mirrors what the average US family earns in one year, and produces in one year of work, one new home. The $50K=labor to build one new home=compensation of typical US household working for one year.Most of the labor needed for home building is skilled or semi-skilled and is a good bench mark for human work: carpenters, plumbers, masons, roofers, surveyors, electricians etc.

What happened to cause the financial crisis? Banks, for example, took $1 million, (labor cost of building 20 houses), and borrowed $10 million (labor cost of building 200 houses) and with those $20 million they bought mortgages with the same amount. Again, $20 million dollars is equal to the average American household working 400 years, or the manpower it takes to build 400 houses. Why does controlling the manpower to build 20 houses give you the right to buy, re-package, and sell securities worth the manpower to build 200 houses? This money ceases to be a legitimate and useful store of value, and becomes a dangerous abstraction.

In the financial crisis banks used leverage, borrowing 10 times the invested capital, to buy mortgages, re-package them in the bizarre derivatives that have become infamous. Eventually almost all the major banks and investment banks had large portions of their portfolios invested in these types of products, and when the confidence was lost in their value, in came the margin calls, the bubble ended, and that is how we arrived at the current situation. The financial crisis is an entirely abstract bubble that grew and burst, simply because we have lost site of the reality of money.

Money is extremely useful and productive, and so is responsible lending, but when greed is combined with the abstract money, we arrive at the absurdities of modern America. For example, Stephan Schwarzman co-founder of Blackstone private-equity firm, was paid $702,440,573 in 2008. That is equal to the average American family working for about 15,000 years or Mr. Schwarzman building, by himself, 15,000 houses in one year.

No doubt Mr. Schwarzman is a bright fellow, but is he really worth that kind of compensation? It’s reasonable to think that the average skilled tradesman recognizes that a nuclear physicist, an admiral, or a brain surgeon deserves a higher compensation than he does. But how much more? Ten times more, twenty maybe, in an extreme case, 100 times, but 15,000 times more?
Is Mr. Schwarzman to blame, or Madonna who made $100 million, only a bit more than 2,000 years of the typical American family working, or Kobe Bryant, Tiger Woods etc? Of course they are not to blame. Humans are tremendously greedy; we are hard wired that way. If we allow people to make that kind of money, they will figure out ways to make it and every once in a while collapse the world economy in their insane greed.

Human culture has developed institutions to reign in our appetites for violence, sex and excess. We now need to simply put a tax of say 90% on all money earned over what seems to be a ridiculous level. Maybe 100 times the labor it takes to build a house?

And for the financial markets, the cause of the crisis is not a lack of liquidity; it is a lack of reality. Herman Daly puts if very eloquently.

'The current financial debacle is really not a “liquidity” crisis as it is often euphemistically called. It is a crisis of overgrowth of financial assets relative to growth of real wealth—pretty much the opposite of too little liquidity. Financial assets have grown by a large multiple of the real economy—paper exchanging for paper is now 20 times greater than exchanges of paper for real commodities. It should be no surprise that the relative value of the vastly more abundant financial assets has fallen in terms of real assets. Real wealth is concrete; financial assets are abstractions—existing real wealth carries a lien on it in the amount of future debt.'

We need to make money real again, not create more of it.