Flamingos are fascinating creatures, with their pink plumage and quirky behaviours. But have you ever wondered why they dance, and what their elaborate performances actually mean in flamingo society?

A young flamingo hatches with beautiful silver grey down. This is then replaced with dull brown feathers. It takes about five or six years for them to gain their full characteristic adult pink colour, which builds up from their carotenoid-enriched diet. The same substance is present in the carrots you eat. Until that time, the adults aren’t keen to let the youngsters take part in what the flock does.

That’s the question WWT have been researching for a few years, and we’ve made some fascinating discoveries. Flamingos, like all birds, have excellent colour vision. Why else would they invest so much time and energy into creating such vivid feather colour if they couldn’t see it? For a flamingo, it would seem that their pinkness is all about finding a breeding partner and being “useful” to the flock. 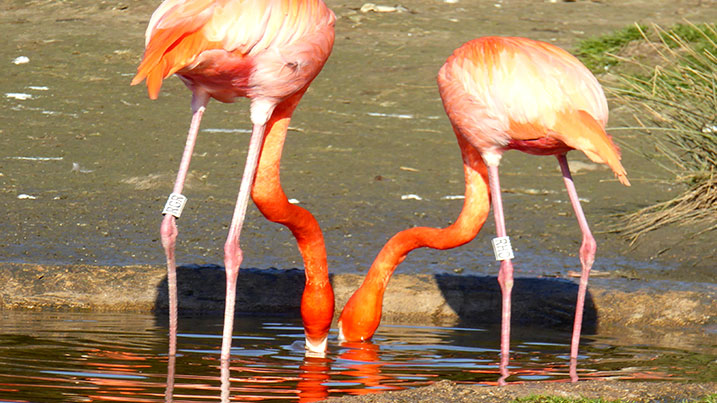 WWT research associate Dr Paul Rose explains further: “Flamingos all display extreme sexual selection. They do an intense amount of courtship display and use their bright feather colours to attract a mate. So, they really want to be in flocks with other birds that are likely to be breeding partners and are ready to nest at the same time.” So, the flamingos will only breed when all birds are ready.

"They synchronise their behaviour in part by the colours of the other birds in the flock. So it makes sense for them not to bother with birds that aren’t pink enough. Young flamingos have to bide their time on the edges of the flock, until they can show off the same bright hues as the adults. Only then will they be welcomed into the centre to take part in the breeding rituals and eventual nesting."

We now know that there are 136 combinations of dance moves a flamingo can perform during courtship. This revelation came from scientists studying wild greater flamingos in the Camargue in the Mediterranean. Some of the courtship dances are complex and the research has shown it takes many years to learn the more complicated moves. The complexity of a flamingo’s courtship ritual increases with age up to around 20 years old. After that it decreases.

Head flagging is one of the more common dance moves. This warms the flock up to the idea of breeding and is most often started by the largest, most dramatically pink males, although both males and females join in.

The subtle art of courtship

During the group display you can also see birds flashing their wings. This is known as wing saluting and takes a few forms. The bird either stands very tall or leans forward and looks like it’s bowing. The flamingo then lowers one wing to the side and flashes it open. "Interestingly, this wing flashing behaviour is especially significant in Chilean flamingos. Apparently you can work out who they fancy based on the direction the wing is flashed. The bird they like will have the wing flash directed towards them. In the other five species, it’s not so subtle and they show everyone and anyone that’ll watch," Paul says.

A conveyor belt of flamingos

The birds also charge up and down in their enclosure in a dance move known as “marching”. They might also run all together, but not so tightly, flapping their wings. This is also a form of courtship display but one that’s less coordinated than regular marching. Lesser flamingos excel at marching and their legs all appear to move as one, as if on a conveyor belt.

Did you know? Flamingo facts

How you can help

Find out more about adopting a flamingo

Or come and admire our rose-tinted flamboyances at WWT Slimbridge, Washington, Martin Mere and Llanelli. Become a member of WWT for free entry.